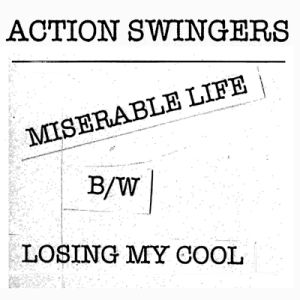 Thanks to Total Punk Records (a division of Florida’s Dying), this is the very first time these two songs find themselves pressed to vinyl. Considering the tracks we’re originally released in 1994, it’s kind of expected they’d be lost in shuffle by now. But with the kind of crusty punk we’re encountering here, it’s far from a surprise that this stuff is coming from the Total Punk label, where we’re always guaranteed 100% punk. Scuzzy guitars, disgusted vocals and a snotty, low-life attitude is exactly what we can expect from something as filthy as this. “Miserable Life” is just the kind of foul dirge you would expect it to be, with grungy guitars and a nasty snarl, but it’s B-side “Losing My Cool” that ends up stealing the show. Propulsive, pedal-to-the-metal intensity drives this song straight into mangled guitar oblivion, revealing an obnoxious metallic shred midway through the mix that’s as harsh as it is invigorating.

BUY the 7″ directly from Florida’s Dying – limited to 500 in hand-stamped covers !
Action Swingers on Facebook