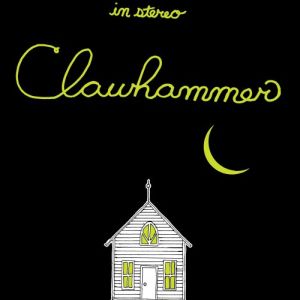 Wee Rock Records in Springfield, MO just dropped a new 7″ single from CLAWHAMMER, a 4-piece folk band also from Springfield who began playing together in 2011 with some different ideas.

Considering what we’re used to around here, it’s nice to be able to say that this 7″ is out of our comfort zone. This Missouri crew brings in a peculiar combination of influences, melding traditional Ozarkian folk with heavy repetition and breathy vocals for a different sound. “I Think I Heard a Sound” is a foreboding tale which instills a threat of uncertainty, revealing endlessly moody qualities and feelings of paranoia as the track unfolds. Instrumentally the song is driven by loop-heavy banjos and fat, slinky upright bass lines (traditional characteristics of Ozark folk), followed by a gritty shred of noise (is that still a banjo?) to bring it all home toward the end. The loops you hear on their 7″ weren’t pre-recorded, as the band prefers to sample themselves live, on stage. This quickly helps reinforce the idea that these guys could put on a memorable live show, so check out both sides of the 7″ below and hear for yourself.

I Think I Heard a Sound –

BUY the 7″ directly from Wee Rock Records !
Clawhammer on Facebook