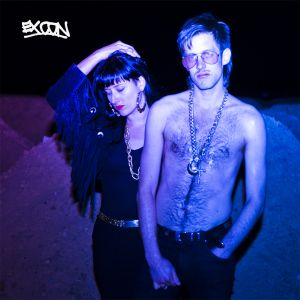 The debut 7″ from EX CON comes from the Brisbane-based label Bon Voyage. The band is led by the duo of Joanna Nilson up front and James Dalgliesh (vocalist of Slug Guts) on guitar.

The tracks on their 7″ were recorded live as a four piece by Luke Walsh at the Brisbane Bar and Grill one night in February 2012. Chances are things were loud at the bar that night, because this is some harsh-sounding stuff you are about to encounter. The three tracks make up a whopping 12 minute 7″ including Nilson’s bloodthirsty growls paired with Dalgliesh’s jagged, unrelenting guitars. This creates a disturbing cacophony of sounds, much like you’ll hear in heated catastrophic meltdown “Bronzer”. Things hit their highest point in 6-minute closer “Right Brain”, which follows through with sharp discordance until the track suddenly splits off into noisy psychedelia. A rigid beam of high-voltage guitars swallows up the track for the remaining three minutes, crushing all hope in an invigorating storm of monumental guitar electricity that will have the blood coursing through your veins. Words don’t really cut it, just listen to the track below!

BUY the 7″ directly from Boy Voyage Records – limited to 200 !
Ex Con on Facebook