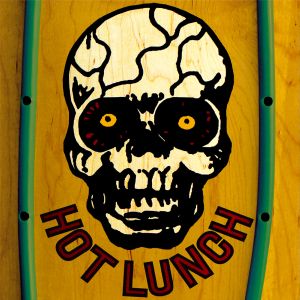 It’s an absolute fact that anyone who is familiar with HOT LUNCH knows it took way too long to release their debut album. Thanks to Who Can You Trust? Records in Germany, that’s no longer a problem.

This debut album is just the kind of electrified kick-in-the-ass we were expecting – it was hard to anticipate much else given their debut single – but San Francisco’s Hot Lunch deliver on every little bit of the promise we heard in that 7″. Hot Lunch is home to nearly 45 minutes worth of some of the heaviest, blues-leaning punk n’ roll we’ll hear in 2013 and it’s only January. With that being said, it’s not a surprise to learn that Hot Lunch recently signed with Tee Pee Records in New York to release the album in the United States.

It’s one thing to say the guitars of Aaron Nudelman act as the driving force in these songs because there’s no escaping their rollicking and over-driven intensity. At the same time you also can’t forget frontman Eric Shea, who guides us through this heated mess with his scratchy, bloodthirsty howl track by track, leaving us wondering how the man still has a voice after any given live performance. It’s really up to how you hear it, but with these two sharing the spotlight there’s just no way for us to possibly ignore what’s going here.

Tracks like “Handy Denny”, “Ripped at the Seam” or “She Wants More” show off what these guys do best by shredding the skin clean off our faces with little to no remorse whatsoever. Later tracks like “Lady of the Lake” or album-closer “Monks on the Moon” offer up that familiar shred, only that they’re a bit longer and take on a more progressive sound instead of just ripping on through a three minute track. Just listen to these fine tracks below and you’ll quickly learn what’s going on here.

BUY the LP directly from Who Can You Trust? Records – limited to 500 !
Hot Lunch on Facebook