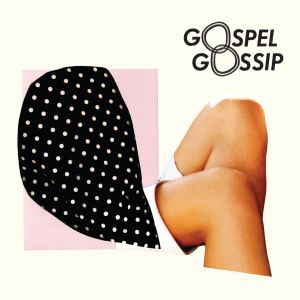 The trio of GOSPEL GOSSIP hail from Northfield, Minnesota. Their 7″ comes courtesy of Guilt Ridden Pop (a label based in St. Paul), with three brand new tracks of their frothy dream pop.

Believe it or not, Atlantic Blue is actually their first official release in nearly three years. If you’ve been waiting this long to hear from the band again, you’re now in luck, because this 7″ acts as the beginning to their upcoming full-length album that’s due out this winter. They’ve had plenty of time to work on new material over that three year span, and well, let’s just say they used their time wisely.

“Atlantic Blue” is a memorable track all on its own, but they did us one better by giving us this whole gorgeous 7″ instead. “Atlantic Blue” quickly suggests a band that knows what they want to create and exactly how they want to do it – considering they’ve been putting stuff out since 2007, it shouldn’t really come as a surprise either. Sweet and sugary guitars are awash against the subtle yet constant crash of the cymbal, leaving lead singer Sarah Nienaber’s vocals to cut through the creamy vapor. The guitars come off strong with their heavenly tone, making for a lush atmosphere that is easy to get lost in – each hook is light and airy, much like you’re on a slowly ascending journey up toward the clouds. All of these stunning elements meld together for a colorfully sweeping finale, just don’t forget there are still two other tracks on this 7″ that need your love. Hear’em right below, right now.

BUY the 7″ directly from the band on Bandcamp – clear vinyl limited to 200 !
Gospel Gossip on Facebook