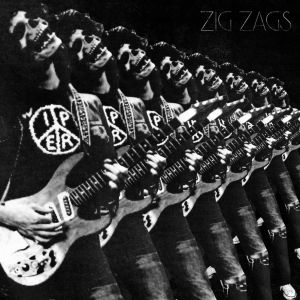 ZIG ZAGS of Los Angeles have easily been one of our favorite up-and-coming bands throughout the year. Monster Wizard is their third 7″ of 2012 and first for Tubesteak Tuesday Records, bringing us two new tracks of their sludgy psych-punk.

As soon as Zig Zags dropped their Scavenger 7″ for Mexican Summer at the beginning of 2012, it was clear they were going to be a force. Much like their first, the two tracks on Monster Wizard offer up their filthy strand of psyched-out sludge-punk, creating a sense of raging consistency through their first two singles that leaves you with plenty of hope for the future.

“Monster Wizard” quickly hits home with its dirty, grungy guitars and snarling attitude. It all comes saturated in a whirlwind of sweeping psychedelic euphoria, making up a sound where “heavy” would be a gross understatement. The track is a true skull-splitter, opening the single with a crushing psych stomp and simultaneously exposing you to unhealthy amounts of toxic radiation. Raspy, chanted vocals and heart-stopping guitar fuzz gives this track a disgusted edge, driven by that intense wave of underlying haze to do some serious damage. Noisy, mutilated psych textures continue to assist in the track’s staggering meltdown of a sound, suffering a spike in speed within the final minute for a berserk finale.

B-side “Turbo Hit” comes off with a tighter grunge-punk sound right off the bat, having a slightly cleaner edge with an extra pop kick this time. Deep, swelling bass lines help keep the rhythm as the shredded guitars call the shots on top, overall sounding a lot less crusty and assaulting than “Monster Wizard.” Go ahead and give it a try right below. Also, don’t forget to grab the 7″ – there’s only 300 to go around and it sounds fucking phenomenal. Do it.