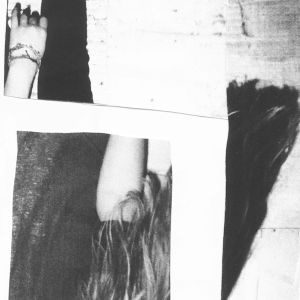 It’s been awhile since their debut, but NAOMI PUNK dropped their sophomore album The Feeling on Couple Skate Records earlier this year. The LP came in a short run of just 300 copies and has since sold out, brimming with slow-to-medium paced grunge-punk dirges with a minimal approach and plenty of clangorous guitar jangle.

You could say these guys are playing punk rock, but it’s all done up with their own slowcore formula which gives this record its own oddly unique and challenging twist. A song like “Trashworld” literally drag across the floor, lazily moping as the spiny guitars unfold into a drawn out hook, resulting in a metallic swirl of cooing vocals and crashing cymbals. This becomes the pattern on the LP, forged right away by the threatening stomp of “Voodoo Trust.” This pounding intensity continues on for the duration of the album, revealing some interesting changes as the LP plays out.

Later we encounter “Gentle Movement Toward Sensual Liberation,” a different type of track that makes it difficult to decipher the origin of these sounds – we could be hearing anything from an organ to a wigged-out guitar effect, but there’s no denying it fits the brooding vibe of this record. There’s a few of these lo-fi arrangements included, making for a haunting (and lighter) change of pace throughout an otherwise heavy record.

Listen to “Voodoo Trust” and “Burned Body” right below for a healthy dosage of this slowed down grunge-punk. If you’re looking for the big picture, this record is certainly worth every second, and you don’t have to wait until the repress comes from Captured Tracks in November! It’s actually not too late if you’re looking to buy a first pressing of the record (!), but get used to these beatdowns because you’ll be seeing this album again.

3 thoughts on “Naomi Punk – The Feeling”