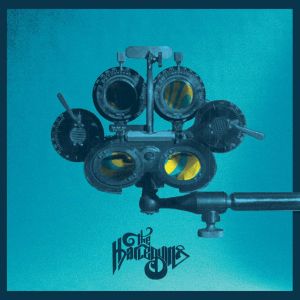 THE HARLEQUINS hail from Cincinnati, Ohio with their fuzzy psych-pop. This cassette from Random Old Records & Tapes is their second full-length album to date and their third release overall as a band.

The Harlequins leave us with a hefty batch of fuzzy, blown-out psych-pop, serving up an album that’s thirteen tracks long and just shy of the fifty minute mark. They operate as a trio, but you’d probably never know that listening to the cassette. These tracks offer bold, crooning vocals whose melodies stand out heavily against the wall of psych fury in an introduction like “End For Us,” which eventually becomes a pattern on the cassette. The trio offers us a mixed grab-bag of these sharp and energetic psych-pop burners, with each track varying in size and shape as the tape unfolds.

The six-minute monstrosity titled “Burned” will win you over with its swaying guitars, wonky bass lines and tom-heavy rhythms. Eventually the track begins to trial off into furious psychedelia as it’s broken down into a clangorous black hole, suddenly coming to a pulsing finish as it all levels out. Later, “Abandon Ship” offers a creeky, strung out intro driven by a throbbing bass. It carefully morphs into a fiery pop-punk stomper with galloping drums and a wall of feverish guitars, making a rowdy backdrop for the soaring vocals. The track keeps growing for a gaping finish, rounding it all out with excellent progression and a crushing finale.

The thing to remember about this cassette is that around each corner you never know what you’re going to encounter – just about every track offers a challenging psych-out at some point, each a beast of its own kind. A solid cassette indeed, if you’re looking for consistency, this band will not disappoint. Hear these cuts from the cassette below, then grab one directly from Random Old Records!

BUY the cassette directly from Random Old Records & Tapes – limited to 100 on blue tapes !
The Harlequins on Facebook