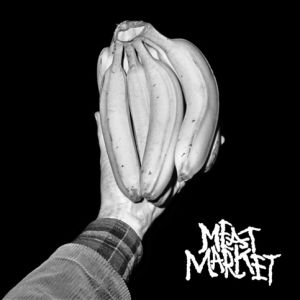 Oakland, California surf-punks MEAT MARKET drop their first release on vinyl, made up of some old and familiar tracks along with some brand new ones. The LP comes from Under the Gun Records in Los Angeles in a run of just 500 pressings.

The LP originally dropped as a cassette tape, which means we’re about to give this album the double-plug. The new, self-titled LP features ten tracks of their smart and sensible surf rock, taking a handful of the songs from the original cassette and filling them out immensely. The LP sounds so much better it shouldn’t even be a question, because now we get these fully-realized and fun-loving surf rock anthems like “TNT” to fill our hearts with joy. A song like this is overflowing with positive vibes and hook-heavy tendencies, led by warm, sunny guitars with a glinting, surfy twang. Care-free vocal hooks sit on top of the shredded guitars, supplying the song with a dose of innocence that is nothing short of catchy. Underneath there’s a relentless stomp that drives the track, which solidifies nicely at the end to show off a punching punk edge.

Hear the track below and if you’re sold on that, go and check the rest of the LP on the Meat Market Bandcamp.

BUY the LP directly from Under the Gun Records – first 100 on color vinyl !
Meat Market on Facebook
Hear the rest of the LP on the Meat Market Bandcamp

Past Related Posts:
Meat Market CS (Under the Gun)