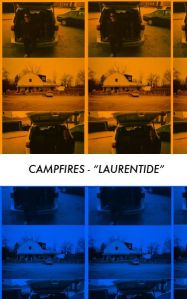 CAMPFIRES is Jeff Walls and Laurentide is his second cassette we’re covering this year. Walls leaves off right where he left us last with the previous Slaughter Tropes cassette.

These songs were recorded in a barn near Ann Arbor, Michigan in the Spring of 2011 and sound like a continuation of the awesome Slaughter Tropes cassette from earlier this year. The fact that this new cassette manages to pick up where the other one left off is certainly an awesome thing, but also goes to show an unusual level of consistency that doesn’t always work out this smoothly. The bubbly folk-pop elements are still intact, which shine through a thin veil of lo-fi grit that ever-so-slightly crowds these songs. The bouncy guitars have a folksy twang that helps create the lively pop charm, which is evidenced throughout the tape in tracks like “Laurentide” or “Chasing Planets (Again).”

“Fail by Design” starts out the cassette with that folksy twang and makes it hard to want to listen to anything else. It’s a warming introduction which will certainly keep your attention for the duration of the tape. Following that, “Laurentide” begins by speckling the track with little guitar licks, where we eventually meet a gritty sounding Jeff Walls who hums and sings us through the track. The positive vibes continue to flow through “C’est la Vie” as well, which shows off highly concentrated guitar hooks that make for a memorable chorus that will stick to you like glue.

There’s no denying here that Walls is onto something special if we’re thinking the same way after two cassettes. The good news about that is that Walls is currently working on his next project and you can find a bit more detail about that right here.