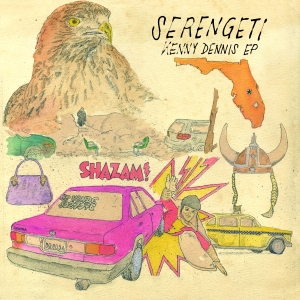 David Cohn (aka Serengeti, aka Kenny Dennis) has released 11 solo albums in the last ten years, in addition to appearing on almost as many split and collaborative records. He is about to release a new EP through Anticon written entirely from the perspective of his O’Doul’s drinking alter-ego named Kenny Dennis.

The first track “Rib Tips” serves as an introduction to Kenny. He is a working man from Chicago. He loves ribs, sandwiches, chicken wings, da Bears, O’Doul’s and his girl Jueles. This song eases us into the album with a slow lumbering beat, deep bass, and tripped out horns. Kenny is an old school rapper so all these songs are to sound as if they were recorded in the mid 1990’s. Producers Jel and Odd Nosdam do an excellent job furnishing the vintage break beats to make these recordings sound authentic.

“Don’t Blame Steve” picks up the pace slightly with a heavier beat and more intense vocal delivery. The song gives an alternate history of the “Steve Bartman incident”. Kenny claims that he was actually the person that knocked the baseball out Cubs left fielder Moisés Alou’s glove, but Steve Bartman was unfairly assigned blame.

The next track “Shazam” requires some explanation: back in 1993 Shaq and Kenny were label mates on Jive Records. Shaq mocked Kenny’s mustache at a Jive Records Showcase. So this song was written in retaliation to Shaq’s rude comment. The title is a reference to the 1996 Shaq vehicle Kazaam which many consider to be the worst movie ever made. This is by far the heaviest sounding track on the record.  The beat is ominous and intense, with a deeply menacing keyboard in the background to accentuate  Kenny’s animosity towards Shaq, his awful records, and un-watchable films.

Side B starts with “Top That” which reveals many of the un-spoken implications of the Kenny Dennis character. Serengeti is actually a really cool dude, so it is baffling that he would choose an alter-ego as mundane and sweetly-naive as Kenny. However Cohn has stated “Hip-hop is so depressing to me, It just doesn’t bring any new thoughts to the table, it’s the same redundant ideas.” Kenny Dennis is most definitely different.

The next track “Kenny Dennis” goes deeper into the psychology of the title character. This song mocks the self obsessed egotism displayed by many wrappers. The first line is “I was at a charity dinner for kid’s who have trouble talking.” Instead of talking about drugs, money, and bling, Kenny brags about charity dinners, helping a stranded motorists, and other such altruistic deeds.

“Flat Pop” closes the album on a very chill note. The beat is slow, cool, and dance-able with a tripped out loop in the background. Kenny uses this final track to pontificate on his favorite things in life: primarily bratwurst and The Bulls.