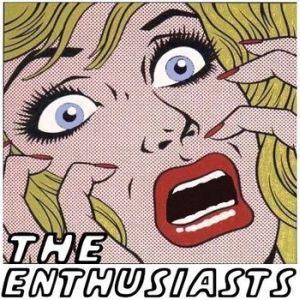 THE ENTHUSIASTS are a rock and roll trio from Ardsley, New York, a small town just north of the Big Apple. They dropped their second 7″ from their very own Magic Sleeve Records over the past summer.

The Enthusiasts offer straight up rock and roll without any bullshit whatsoever. Their latest 7″ is surely justification of this claim. The song “Sinkin/Risin” starts out on a relatively rough note with its tough swagger, but the song becomes even more rowdy as the track unfolds – this is evidenced by the high voltage and rollicking guitars that lead us toward the end. “Sinkin/Risin” hits its defining moment within the final minute, shoving fiery guitar solos and manic drumming straight down our throats. This is certainly the sort of pummeling musical rush that keeps us going. You can feel the energy building as the song pulses on, making the end result that much more satisfying and rewarding when it’s all said and done.

On the flip side is the twangy “Joanne” which has a slower pace. The song is guided along by a crunchy, dragging guitar, suddenly suffering an obvious swing in momentum a bit past the halfway mark. The end result is another heart stopping finale, this time made up of sharp guitar leads and steady drumming that keeps the bruising beat running smoothly. By now I think it’s safe to say we’re looking forward to whatever comes next from these rowdy New York rockers. Don’t miss the songs below and go grab a 7″ before they’re gone – there’s only 150.

One thought on “The Enthusiasts – Sinkin/Risin 7″”