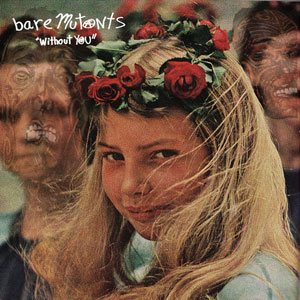 Here’s the debut single from BARE MUTANTS of Chicago, IL. “Without You” comes in the latest batch of new material from Hozac Records which has yet to let us down, coming in a first edition of just 475.

Since Bare Mutants hail from Chicago, it’s not a total surprise that Hozac added them to their constantly growing lineup of bands. They shouldn’t have much trouble fitting in either. Said best by the folks at Hozac, “Both heart-crushing tracks on this debut single aren’t going to quicken anyone’s pulse, yet the solemn seduction that awaits you within these celestial grooves is immeasurable in its trance-inducing tension.”

With a description like that on the Bare Mutants band page, they’re really making it easy for the rest of us. That short description is such an accurate snapshot of the Bare Mutants sound that I would feel wrong telling you anything else. It’s all there, ranging from the slowly oozing nature of their perplexing songs to the blissfully hypnotizing elements that jangle and shimmer in the light. Aside from all this, one of the more striking aspects of this single comes from the audible comparison of a band like Crystal Stilts, to which both Brad Hargett (of Crystal Stilts) and Jered Gummere, the singer in Bare Mutants, sound almost identical in their monotonous slur. Even aside from the vocals, the instrumentation and the kaleidoscopic texture of the songs can also help speak to that comparison as well.

Hear both sides of the 7″ single right below and then go grab one from Hozac before it’s too late!

BUY the 7″ directly from Hozac Records – limited to 475 !
Bare Mutants on Facebook