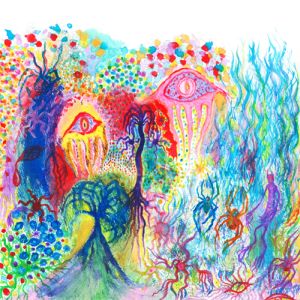 Today we are proud to premier the debut LP from the one and only SPIDER FEVER. Coming from the good folks at Windian Records, Mario Rubalcaba and the gang are back to party with more of their catastrophic, pedal-to-the-metal punk rock.

Coming in at nine full tracks and over a half hour of obliterating material, Spider Fever didn’t leave us hanging with their debut LP. Delivering on the promise we heard in each of their earlier singles, it’s no surprise what they’ve cooked up for us this time around. Rambunctious and dense songs are packed up tight with big, swallowing guitar hooks that sound tightly woven and stressed, hitting like a brand new ton of bricks with each track that passes. The rowdy “Hyena” might best speak to these qualities early on, which finishes off with a huge, sweeping guitar solo that blankets the end of the song. The good news is as you move on through the tracklist, most of these songs follow that destructive and invigorating pattern. The bad news is, well, there is no bad news.

A bit later on “Don’t Stray” shows us a slightly lighter side of Spider Fever, where they slow the pace and give us a few minutes to catch our breath – something that is totally necessary given the exhilarating nature of most of these songs – the follow up “Out in the Crowd” proves my point exactly. “Out in the Crowd” is dominated by crashing cymbals and big, chunky guitar riffs, showing off what Spider Fever are all about in a solid three minutes. “Don’t Let Death Get in the Way” follows up next, featuring fiery guitar soloing and a relentless pace that will widen your eyes as the hair on your body is singed clean off. All these qualities go a long way to paint an excellent idea of what Spider Fever would be like in a live setting – complete, utter, destruction.

The final two tracks – “10x Dead” and “Simply Nervous” – will leave you on your ass longer than anything else from the record, wrapping up the LP with a seven minute suite of surefire punk rage that will leave you with no other choice than to spin it again. This finale (ahem, grand finale), better known as “Simply Nervous,” is surely worth noting. The song serves up so many momentum swings that you’ll be striving to keep up with the maddening pace, which means your better off just sitting back and letting the beat-down unfold naturally. Whether it’s the scorching guitar solo action or the full-throttle rage that refuses to settle down, this extended track is bound to stir up some fury. When it’s all said and done and the dust settles, this is the kind of roughed-up, ecstatic beat-down that so awesomely categorizes that punishing Spider Fever sound.

Take a few minutes to check out these songs below because you won’t find them anywhere else just yet. If you can manage to sit tight until the record release date on March 20th, listening to this album in it’s entirety will be all the sweeter – trust me. That being said, you should probably make a point to go and PREORDER the LP from Windian Records – the first 100 records come on clear blue vinyl and now is your only chance to get one! Do it!