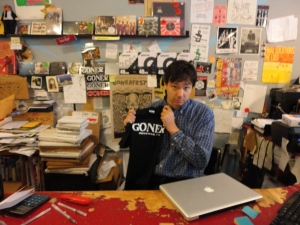 If you ever have the pleasure of traveling through Memphis there are three things you absolutely must see before you leave: Sun Studios, The Stax Museum of American Soul Music, and the world famous Goner Records.

Goner is a record store and label co-founded by Eric Friedl (aka Eric Oblivian). The garage punk world has been rocked by the news that the Oblivians are going into the studio to cut a new record. This will be their first release in over 15 years. I stopped by Goner to grab some records and Eric Friedl was sitting behind the register. I took the opportunity to ask him a few questions about the upcoming Oblivian’s record.

Is there a name for the new record?

Do you know when we can expect it to come out?

When do you go into the studio?

Eric: At the end of march.

What inspired ya’ll to do another record?

Will it be the original lineup?

Eric: I Hope so. They’ll probably get rid of me first. So as long as I’m there I’m cool.

Will you be playing any shows to promote the new record?

Eric: I don’t know…no idea…getting the record done is all we have planned for right now.

(A note for travelers: Goner Records is located right across the street from The Pilgram House Hostel which is full of cheap beds and cool kids.)