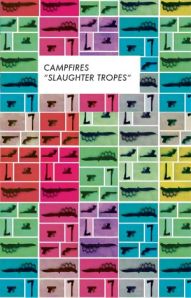 CAMPFIRES, otherwise known as Jeff Walls, just released his follow up cassette after releasing a pair of 7″ singles from Mexican Summer and Small Plates. The cassette comes in an edition of 100 from Priority Males Tapes featuring his folksy psych-pop sound.

“Slaughter Tropes” is one of those releases where right off the bat you can tell if you’re going to approve or not. That was our situation anyway and we immediately endorsed everything about “Slaughter Tropes” from start to finish. Coming from the fitting Priority Male Tapes, Jeff Walls has created a memorable cassette tape of raw and unpolished bedroom-psych-pop. Songs sound gritty and harsh, ranging from shimmering psych-pop anthems (“Melted Rubber Soul”) and exuberant, folksy jam-outs (“Slow Blown Limbs”) with minimal percussion and hollow, shredded guitars. Scattered in-between everything are a few short, instrumental soundscapes (like “Full Midwinter Power” or “Fuck Zurich Anyway”), which help illustrate the kind of sound Walls is going for in one short, surprisingly accessible half-minute span.

There’s plenty of static and jangle crowding these songs, but there’s also plenty of promise that stems from the mindful and structured songwriting of Jeff Walls. Other songs like “Distant Hills” will convince you with their repetitive and twangy guitar riffs, not to mention the admirable innocence that can be found in many of these tracks. All that being said, we really hope you’re into this Campfires material as much as we are. Don’t forget to grab a tape from Priority Male before they’re gone, and if that’s not enough there’s still plenty more to check out.

PS – The remainder of the cassette can be heard on the Campfires Bandcamp page.