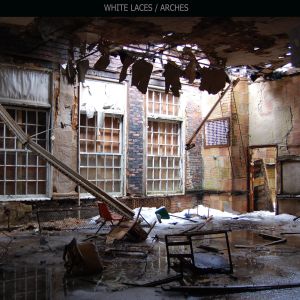 Coming from the Worthless Junk label is both WHITE LACES and Philly-locals ARCHES first release on 7″ vinyl, offering up a track each for an interesting dichotomy of sounds.

For White Laces, “Dissolve into Color” is their first release of the year, followed by another upcoming 10″ EP on Harding Street Assembly Lab, but hopefully more on that one later. Upon listening, their lone track “Dissolve into Color” shows off their quivering psych-punk undertones, stemming from wobbly guitar leads and tom-heavy, primitive drumming that will evoke more pulsing elements in the song. Mindful yet overwhelming song structure and patterns goes to show what these dudes can cook up, supplying just the right amount of unpredictability in a song like this. Sharp guitar leads help the song take a turn for the best near the 2:35 mark, catapulting the track headfirst into a fitting and economical finale as they gradually build momentum. With results like these we can only hope you don’t forget about White Laces – there is certainly much to be psyched about within their small but growing discography.

Arches “Late Last Night” on the flipside is like the answer to the unsettling notions from the A-side. Tidy guitars sound clean and clear as they carefully float along the heavenly horizon, gradually fluctuating between small, fiery build-ups and healing come-downs as the track sways along. These guys have ambient elements working for them in their delicate swirl of guitars, which could certainly manifest into something even greater for their future. In summing up, Arches have certainly found the strung out sound they’re comfortable with, while White Laces are taking advantage of what they are already capable of. Expect plenty more from both of these bands in due time.

BUY the 7″ directly from Worthless Junk Records – only $6 !
White Laces on Tumblr
Arches on Facebook