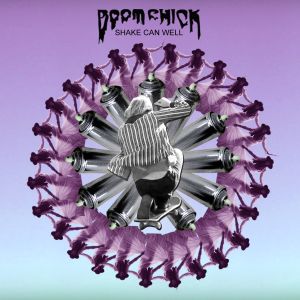 Rock and roll duo BOOM CHICK are putting the finishing touches on their debut 7″ “Shake Can Well.” Hailing from Brooklyn, New York, this is their first release since their 2010 debut album “Show Pony.”

Their new single officially sees the light of day on February 20th, but we’re here bringing you the goods ahead of the game. Boom Chick was an unfamiliar name at first, but now that is no longer the case. “Shake Can Well” goes to show what these perky garage rockers are capable of. The A-side shows off excellent pop sensibilities and high voltage slide-guitar work in between the crashing cymbals, not to mention their playful, fun-loving attitude that so easily comes across in their songs. The addictive chorus features squealing guitar shreds combined with clanking percussion, resulting in quite a refreshing blast of garage-pop as you spin it a second time. To sweeten the deal even further, the lyrics are actually ripped right from the back of your typical aerosol spray can. If you want to talk about original ideas, then look no further. Who knew something like that could work out so well?

On the B-side, “Sweaty Dress” seems to ignore just about everything on the first track, sounding like your typical prom-night anthem as you slowly sway across the dimly lit dance floor. The careful guitars slowly guide the song to its end, making up a tidy, button-downed song which they describe themselves as “The love ballad for the love and obsession confused.” Pretty much dead on, don’t ya think? Check it out below and see for yourself.