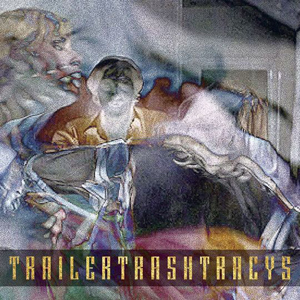 The latest 7″ from TRAILER TRASH TRACYS is also the precursor to their debut full length album “Ester,” featuring two tracks from the LP that will eventually drop on February 1st.

Trailer Trash Tracys employ a familiar sound to say the least (remember Still Corners?), but this group makes their sound work well with some fresh ideas. There are plenty of positive vibes to take away from the swirling whirlpool of guitars that swallow you whole, including the pulsing bass drum and the murky guitars that surge right above you head. This all takes place in a song like “You Wish You Were Red,” but it’s “Engelhardt’s Arizona” that steals the show on a 7″ like this. Unsettling guitar textures plague “Engelhardt’s Arizona” from start to finish, sustaining a trembling, haunting element throughout the track that refuses to settle down. The bumping bass keeps the song moving while the perpetual guitar vortex hypnotizes you with it’s captivating glow, supplying a spiritual element in the song that is impossible to ignore. Once your stuck in it’s grasp there’s no snapping out of it, so at this point we’re only anxiously awaiting more from these London haze-rockers.

You Wish You Were Red –

Trailer Trash Tracys on Facebook
BUY the 7″ directly from Insound