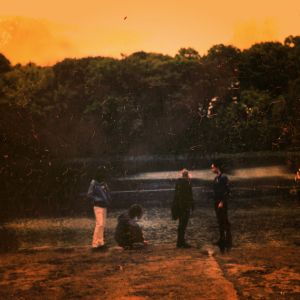 Opening with a brief and creepy soundscape that sounds like a tour through a haunted house, this quickly sets the tone for the rest of their record – a record that has been patiently waiting to see the light of day and thankfully that time is now. Far-Out Fangtooth are not quite a household name across Philadelphia yet, but as this record begins to seep into heads and slowly take over, that is something that is bound to happen sooner than later. What you will find here is dark and possessed goth-punk with an occasional psych-pop flare, riddled with melodic guitars and snarling vocals, all combining into one blistering and impressive debut LP.

“Hate” quickly outlines their sound with cruddy, stinging guitars and a trashy, metallic complexion that produces the dense, clangorous noise that you constantly find yourself immersed within. Next up, “White Valley” is the first track that truly shows their shadowy and dreary sound, slipping into a slow paced doom-coma before accidentally finding its way back to the surface. The marching rhythm continues to push forward as they go deeper into obscurity, which is when they eventually fall off into the strung-out doom-coma that spirals in all directions. When they find their way out, it’s like finally emerging from being lost in an endless graveyard.

Album highlight “Woe” is the kind of track title you would expect from such a self-depreciating sound that this record holds. “Bad karma will burn you in the end/ This must be what hell feels like,” they utter multiple times in the song, further proving their dissatisfaction with something. If you listen closely to the lyrics of this one, the term “morbid” would be an understatement. Death and despair are foreshadowed by menacing guitar shrills and an awesome swirling texture, totally leaving any listener in dismay at the fury of these guitars, however it’s a very subtle and suppressed fury that in the long run is nothing short of invigorating even though it’s not through the roof.

Another highlight reveals itself in “Red Hawk Desert”, where once again you can feel the aching pain in the strummy guitars, driven by the bruising, tom-heavy beat. There’s a ghastly and spectral quality that slithers out from the possessed vocals, as these guys continue to accurately complement their sound with all of the right moves. Then suddenly it’s all reduced to a dry and throbbing guitar pluck before launching you into the closing swell that so flawlessly depicts a heated, sweltering desert. Mangled textures and glowing guitar leads combine with the bruising rhythm for the final minute of the song, leaving your jaw on the floor and one thought in mind, probably somewhere along the lines of “spot on”.

Calm and calculated freak outs are exactly what these Philly-dudes are best at cooking up, proven over and over again in this filthy, medium paced album capable of many moods and ideas. With the remainder, track eight “Window” reinforces this idea as well, while the passive self-titled track takes a bit of a different path, making more of a statement before anything else. Looking back, not many of these songs stray too far from the slower paces, yet they’re still a bit faster, then say, the Uncle Acid album we covered last week, simply for comparisons sake. Check these songs below and get into this shit before it’s too late, and just be sure to remember where you heard it first!