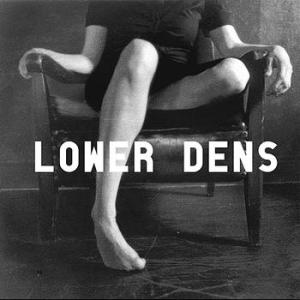 LOWER DENS are a band we wish we could feature more often around these parts. Sadly that’s not always possible, but this one here is so long overdue.

This single wasn’t exactly released recently but it’s always high up on our charts. As you know we’re always partial to the vinyl format around here and this is just another reason why. This 7″ is one of those gems you always find yourself gravitating back to no matter what the case may be. There are reasons for this, one of them ultimately being the inclusion of “Johnssong” on the B-side of this fine slab of wax.

“I Get Nervous” is the without a doubt the lead single from their debut album “Twin-Hand Movement”. Even without the rest of the LP to back it up, it’s still a memorable song in its own right – swarming, beautifully glittering guitars and a unique, perpetually swelling complexion that is so gloriously overwhelming and vivid you can’t help but embrace it. On top of all that, the fact that Jana Hunter gracefully includes her distinct voice over top of the mix is surely a miracle. No wonder they put this on its own single.

Sure that was a good decision, but you still haven’t experienced the B-side of the single, “Johnssong”. On the flip side, this track begins with it’s tantalizing yet delicate introduction, hereby sealing your interest in what could possibly come next. Suddenly, you’re awash in a wave of glowing guitar perplexity that somehow falls on a fine line between purely heavenly bliss and ingeniously subtle insanity – a feat not many bands are capable of delivering in this day-by-day music industry. One second you find yourself on the brink of total destruction from textured and rattling guitars – the next you’re sitting pretty in a protective bubble of bliss that they eventually decide to ride out on until the very last guitar pluck. Now it’s up to you to shake such a distinguished and remarkable sound from your memory banks. If you haven’t had the pleasure yet, listen to both songs below.

BUY the 7″ directly from Insound – won’t be around forever !
Lower Dens – Official Website