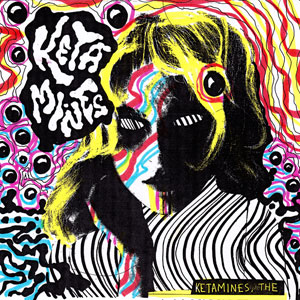 Sticking to camp Hozac for the end of the week, this is the brand new 7″ from KETAMINES of Calgary, Alberta, Canada. Up next is their full length album due out sometime this summer.

Just in case you didn’t know, Ketamines are a five piece psych-pop crew with members who have all had their share in other bands like the Moby Dicks and Myelin Sheaths. Also, Paul and Evan of Ketamines run Mammoth Cave Recording Co., a label we are surely fond of around here.

As far as their new single goes, we are fond of that too. They open things up with the peppy, upbeat self-titled opener that will quickly solidify some hope for the future. A delightfully jangly guitar hook produces sun shining, optimistic vibes while a ripping fuzz bass provides the foundation underneath. This song alone shows promising psych-pop sensibilities while the rest of the 7″ offers even more twists. After this first song you should know what they mean by “bubblegum pop“.

On the flip side, “New Victims” changes things up significantly from the first with a darker, colder, yet still upbeat sound. Colorful guitar swirls suck you up in their powerful vortex while sharp and angled leads continue to pave the way for the rest until the closer “Dig”. This sprawling track features more of a progressive psych-pop sound that moves seamlessly from one idea to the next as they continue to change directions. Swift drumming and surf-rock influenced guitar licks call the shots in this excellent track, to the point where we’re already looking forward to their upcoming LP. Should be rad! Snag their new 7″ from Hozac while ya still can!