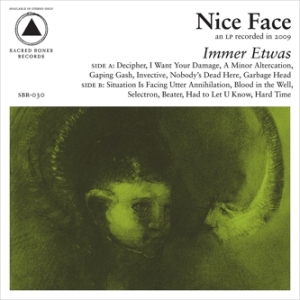 Released by Sacred Bones only last year, the one-man bedroom-band NICE FACE created this dreadful and increasingly abrasive LP. Sadly it’s too late now, but this collection of songs easily would have cracked our “top” lists of 2010 with a commendable position.

If you ever had the pleasure of digging into the Sacred Bones catalog and finding this one on your own, then you stumbled upon quite the treasure. This monstrosity of a record is riddled with all sorts of dire and threatening sounds, whether it comes from the blood thickening palm muted guitar of “Situation is Facing Utter Annihilation” or the mangled screeching of “I Want Your Damage”, which combined are enough to produce a splitting headache. Of the thirteen tracks included on the LP (and the nineteen on the CD version), it is actually a task to find one that doesn’t fit. The hook-heavy and repetitious songs sound as if they could blow out your speakers at any given moment due to the harsh levels of metallic grit and driving sonic fury, but you should be warned that once these hooks sink in they’re not coming back out. These thirteen tracks are essentially punk fueled tantrums when you cut through all the scuzzy filth no matter how disturbing and twisted things tend to get (like the unsettling manic textures of “Garbage Head” or the intoxicating vocal hook of “A Minor Altercation”).

Ian McGee, the sole individual behind the recordings, seems to channel every last bit of his aggressive and inventive energy into this bedroom project, where words like “rage” come off as a blatant understatement. A surely accurate description to encapsulate this anomaly can be found on the Sacred Bones page, claiming that the record “locks Blank Dogs in the pound, erases ‘Psychedelic’ from Psychedelic Horseshit, makes purses and boots out of Crocodiles, and, oh I don’t know…makes a puddle out of Wavves?” Sure that might come off a little cheesy, but it is stunningly accurate to say the least. As you let this album play out, you should have no trouble accepting that statement. Below we’ve picked out some of the most crushing standouts, but there’s plenty more where these came from so don’t sleep on this one any longer or you will be sorry.

BUY the LP directly from Insound
Nice Face on Facebook