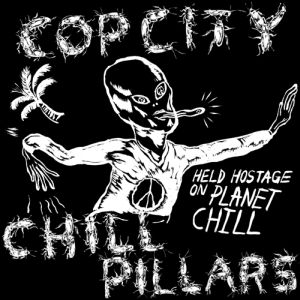 The folks over at Floridas Dying just released the debut LP from COP CITY/ CHILL PILLARS. These strung out weirdo-punks hail from Lake Worth, FL and have created one of the most bizarre and outlandish records I’ve heard this year.

Upon first reading that it might not sound like a desirable feat, so let’s clear that up now – it is indeed. These spacious and minimally obscure songs combine together to make for a total mutation of a garage-rock record, with subtle highlights throughout that don’t necessarily pack a huge punch. Right off the bat you’re already waist deep in swampy, squelching textures where angular guitars call the shots, backed by plump and muddy bass lines that flow at the speed of molasses. A song like “Jennifer” with its menacing bass proves that, making the song swell up to the absolute threshold while crunchy guitars and quivering solos lead the way – or “I Shot the Deputy”, with it’s swarming bass that sounds like an acetic and bubbling cauldron.

If you’re really seeking out a moment or two of insanity, introduce yourself to “Stuff Happens”, which is dominated by an utterly ruthless texture – this is what music would sound like if it could have paranoia attacks. Also reinforcing that claim is “Thirsty Camel”, which features a percolating bass and walls of guitar noise that combine for a sweltering and visible haze, like you could reach out and grab a handful if you felt so inclined. While we’re on that note, “Subtropical Apartment” fits in as well – thick and gurgling basses lead the way for shredded guitars which go from dormant to spastic in a matter of seconds. This eventually leads up to album closer “So Messed Up”, which reveals glowing guitar strums backed by a corpulent and primal rhythm, eventually bringing some of that menacing squelch into play, culminating into a track that brings a little bit of everything from this confusing record into one place. Now check out these songs below and go snag a fresh slab of wax from Insound, because if you give this thing the chance it proves to be a grower.