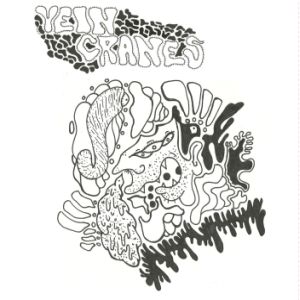 VEIN CRANES are the husband and wife duo from the Florida band Leagues. These three songs are the first they’ve recorded to the name, being put out by the Floridas Dying label in a set of 350.

For your first taste of Vein Cranes, you’ll encounter male/ female vocals drenched in chilling reverb, surrounded by a lethal dose of lo-fi crunch scattered with crushing drums, uncanny keyboards and strangled guitars. You can’t help but detect the weirdo vibes that ooze from all sides of this 7″ (especially during the strung out exit) and that’s only the first track!

“Pink Motherfucker” is an interesting song to say the least, where hateful lyrics will somehow paint a scenario in your mind, but no two people would ever think the same thing. Either way though, you’ll have no trouble admitting this stuff is anything short of catchy from this point on. While their words are bitter and upfront, the song has a delightful tone that acts as the polar opposite to the lyrics, charming you in due time with a memorable chorus that’s decorated with pleasurable chimes and chants of resentment. When you find yourself singing these words to yourself later, don’t hesitate to laugh.

This leads us to “Attitude”, which employs a great balance of electronics, guitar and that lo-fi reverberation that gnaws at you little by little. The first thing you’ll notice is the simple yet crucial drum machine that drives the song, eventually leading you into some fiery guitar work, leaving you no other option but to endorse the idea that these guys are catchy as fuck. Now keep a look out for Vein Cranes down the road because there’s guaranteed to be more, as well as a tour in the coming months.

BUY the 7″ directly from Insound – limited to 350 !
Vein Cranes on Facebook