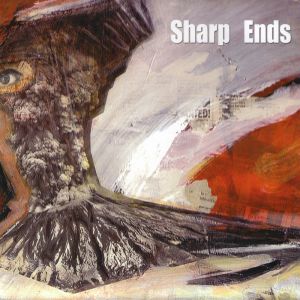 For those of you who never had the chance to cop this back in 2009, today is your lucky day. Mammoth Cave so appropriately reissued the very first SHARP ENDS 7″, perhaps being the most consistent 7″ we’ve covered here since day one.

Considering we’ve covered over 170 singles on this blog, that definitely means something. Coming from the same place as that Krang 7″ we covered not too long ago, these two singles fall somewhere in a similar vein, but not too similar – the ultimate difference being that Sharp Ends follow a stricter punk basis. They’ve got a plethora of singles from renowned places like Hozac Records, as well as a full length on Kill Shaman from 2010, but it seems to be the general consensus that this is their most crucial – and after only the first minute passes (of a near fourteen minute single) this is already obvious. They don’t take a break from beginning to start, which makes for an increasingly exhilarating listening experience that any first-timer would quickly give another go without second thought.

Trying to pick which of these four songs is the standout proves to be nearly impossible, because every last second down til the end can be considered a highlight. Whether it’s the mountainous sound of “Broadview Pressure Test,” the absolute face-beating rage of “Panic Button,” or the ridiculous guitar frenzy of “Vacant City,” Sharp Ends manage to lock you in their hellish chamber of blazing post-punk ferociousness, where these fourteen minutes continuously loop and keep the rampage going strong (otherwise known as your thoughts, because these tracks will dominate them – for example, the guitar hook of “Vacant City”). Buy this thing now while you still have the chance, because if they’re already reissuing it once, chances of a second time seem like they’d be pretty slim – but there’s always room for hope (kind of like for the Flyers game tonight, down 3-0 against Boston, again).

PS – Hear the opening track not included on this post here

BUY the 7″ directly from Mammoth Cave – limited to 300 on white vinyl !
Sharp Ends on Myspace