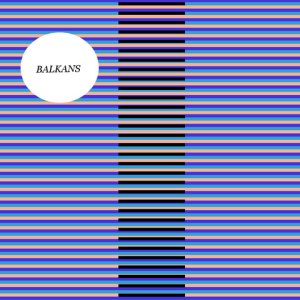 For those of you who recall the BALKANS 7″, now they’ve taken it to a whole new level. Their self-titled full length is due out May 10th from Double Phantom Records, but we’re here to give you a preview before it’s officially unleashed.

Hailing from Atlanta, word has it that none of the four guys in the band are past the age of 20. Even though this is true, you would probably never guess it – and even if you did it wouldn’t really change anything. So, referring back to their earlier 7″, “Edita V” is the opening track to the s/t, which acts as a great snapshot of the entire album. It showcases their berserk energy mixed with a poised attitude, and the deeper you go the clearer this becomes. The band creates spastic and angular indie rock with bruising rhythms, constantly beaming with ecstatic energy and frenetic guitars sprawling in every direction possible. Lead singer Frankie Broyles wails from track to track with the utmost confidence, sounding many years older than their promo e-mail made them seem.

As you work your way into the album, you’ll begin to notice each song has a memorable guitar hook, which goes to show these guys have plenty of chemistry and skill as you wind down. For example, “Zebra Print”, “Dressed in Black”, “Troubled and Done” and “Georgeanne” all stood out, each supplying their own frantic pace with plenty of punch. This proves the band gets creative with their guitars, and after a few runs through you shouldn’t have any trouble agreeing. “Let You Have It” comes off almost like a punk ass-kicker, while “Dressed in Black” has more heavy pop inflections. Another standout was the closer “Violent Girls”, bringing in another spastic ending to wrap things up. The guitars suffer a spiraling beat down before everything is said and done, ultimately proving these Atlanta natives have some serious talent to create potent songs, so do yourself a favor and keep an eye on them.