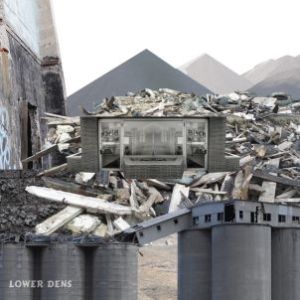 Released on Record Store Day from the Sub Pop crew is the latest single from LOWER DENS. These Baltimore haze-rockers lay down two new tracks, neither of which have been previously released.

Since this 7″ was released on Record Store Day, there’s really not too many places to find it for purchase now, but we’ve done the best we could with the Discogs and eBay links below. The 7″ is limited to just 1000 copies with a track apiece on either side. “Deer Knives” features glaring strums of curious guitar haze which are drenched in sunlight, eventually building up to create quite an unsettling finish. Jangly drumming and throbbing bass lines press on beneath the steamy vapor, which should be a familiar sound considering earlier Lower Dens releases.

On the flip side, “Tangiers” is a much more gentle and shy than you might have expected. Yet this should still be a somewhat familiar sound. Jana Hunter howls away with her distinct voice, which also manages to somehow sound distant at the same time. The swarming guitars and trembling bass lines join together to create a glistening, golden wave of obscurity from beginning to end, as the song never suffers any sudden changes. It’s a free flowing haze jam, which doesn’t demand much from the listener other than to sit back and drift away into your thoughts. Check out both sides right below and grab this thing while you still can!

BUY the 7″ on eBay or from Discogs