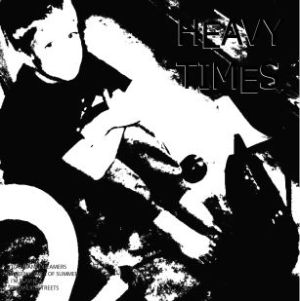 What we have here is a brand new and totally under-announced EP from our favorite Chicago bros HEAVY TIMES. This is one of those things that drops way too silently and it makes you wonder why they wouldn’t put it out there more. I guess that’s because of blogs like this.

The EP is four tracks long of straight to the point punk tinged jangle pop, leaving behind their usual psyched-out tenancies this time around. It comes released in an edition of ten (yes, ten) one-sided 12″ lathe cuts from the mysterious Dinosaur Club Records imprint, whom without, we wouldn’t have half of the Heavy Times releases that are floating around out there right now. So be sure to say thanks.

In the end, this is just more to love from this totally unpredictable and genre-spanning band who consistently serves up the goods. This should excite you for a number of reasons: one being their ability to be consistent yet dynamic at the same time, and the other because they have a full length coming up on Hozac which will hopefully be here sooner than later. It’s not entirely clear whether or not this acts as a precursor to the album on Hozac, but we should probably wait for a more official statement before we jump to any conclusions. Now go buy this shit before it’s gone forever – because that’s what happens, you know.

BUY the EP directly from Dinosaur Club – only 10 made on lathe cuts !

6 thoughts on “Heavy Times – Too Many Dreamers EP”