Just released from the Rough Trade label is the second official single from “The Fool” by WARPAINT. This time around the single is “Shadows”, while the first time it was “Undertow”. Both are songs from their 2010 effort “The Fool”, and both are featured on this 12″ we have here today.

While “Shadows” sounds just like it would from the album, the B-side features a remixed version of the first single “Undertow” which is definitely not on “The Fool”. The remix was put together by the cousinly duo of Javelin, and it’s way more glamorous than you ever thought was possible. It immediately sounds club ready and perfect for the dance floor, but also ahead of the curve and highly futuristic. The glimmering sounds evoke the feeling of an iced over dance hall as you feverishly dance away and ignore the freezing temperatures. This is certainly not a surprise considering it was created by Javelin, but the way they see past the already constructed sounds to create this new jam is kind of jaw-dropping. When listening to the real version of “Undertow”, how on Earth can you even begin to envision such a remix? That is something I’ll probably never understand.

This brand new 12″ single is limited edition (although the number is not clear), and comes pressed on a gorgeously translucent firetruck red vinyl. It comes housed in a vibrant blue sleeve from the Rough Trade folk, as you can see in the picture right below. Head on over to Insound and snag yr copy before they’re all gone. (Couldn’t they have just done this on a 7″??) 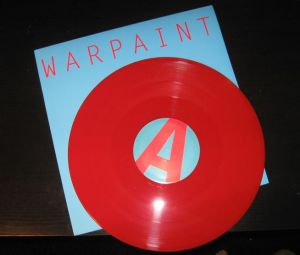