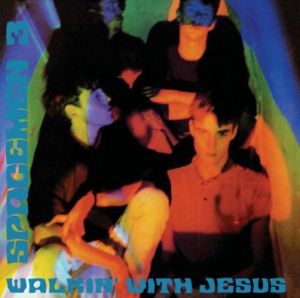 Dating back to 1986, Spacemen 3 released their very first single on Glass Records. Twenty-five years later, Fire Records does these space-rock godheads a huge (and completely necessary) solid by repressing what appears to be a great deal of their discography.

Considering this is one of their firsts, you could say this 12″ single acts as a catalyst to all of the great things to come later on from this band. Included on the tracklist is one of the earlier versions of the song “Walkin’ with Jesus”, which is almost too good to be true. It’s not 100% clear, but maybe this is the first professional recording of this song? If anybody knows, you let us know.

The minimalist approach to “Walkin’ with Jesus” is probably what makes it stick so well, because in this state it’s stripped of everything that was eventually added later. The bass drum doesn’t miss a beat as the shredded guitars press on in all of their repetitious glory, complemented by swirling, strangled freak-outs scattered here and there. The most stunning aspect, however, comes in Jason Pierces vocals. He wails and carries on with the utmost confidence, and it really goes to show just how much this band believed in themselves at such an early stage in their existence. As the insert with the record states, “…this band is vital (in every sense of the word). They are vital because they believe in themselves. Their music is of them and for them.” That quote is illustrated almost too perfectly by this undeniably powerful song. Please don’t miss it.

Also included on this 12″ slice of heaven is a near 14-minute monster of the 13th Floor Elevators cover “Rollercoaster”, as well as another stunning Spacemen 3 original “Feel So Good”. In “Feel So Good”, Pierce and Kember take part in a delicate duet between themselves as the shimmering and mysterious vibes continue to progress and build visual qualities. Before long you’ll find yourself drifting off into an inexplicable state of self-realization and tranquility, before the track suddenly comes to it’s end, to which you’ll only be begging for more. But when it’s all said and done, we should probably thank Fire Records for these fantastic re-issues, so let’s hope they keep’em coming.

BUY the 12″ directly from Insound
Spacemen 3 – The Perfect Prescription previously posted on the Drone (in 2009!)
An insightful resource on Spacemen 3