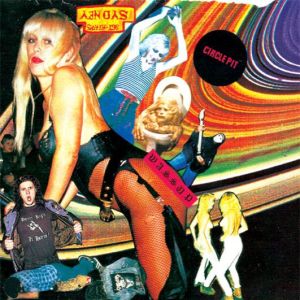 YO! How’s everybody today? Hopefully better after coming through here. Today we’ve got a brand new 7″ from the Sydney scuzz-rockers CIRCLE PIT, and if you happened to dig their other stuff, this one should also be right up yr alley.

Kicking off the A-side is the incredibly harsh track “Sewercide”. Right from the beginning the metallic brutality of the guitars almost sounds as if they’re scratching up against an old chalkboard, giving you no other option but to cringe with caution. This one definitely comes on a bit strong, and the explosiveness of the guitars will probably be the determining factor whether you’re going to listen to this song or not. They continue to tear through and destroy everything in their path until the very end. Flip that thing over for the much more inviting intro of “Roll with the Punches”.

This one is slightly different than the A-side in structure, but if we’re talking about guitars, attitude and intensity, then it’s right on point. There’s almost a party-time vibe that comes along with this song, like you could throw it on at your next rager and people would just keep on ragin’. Scuzzy lead guitar licks dominate the song throughout, giving it an even more scratchy and abrasive quality than it originally would have had. The angsty punk glam is forced down your throat as they continue to press on, and after this one you might be looking for a bit more of the heavy action. If that’s the case we have just the remedy you need. Check out the B-side from the 7″ below, and then check out the A-side and even a download of the full 7″ right here @ Perfection of Perplexion.

Roll with the Punches –

One thought on “Circle Pit – Sewercide 7″”