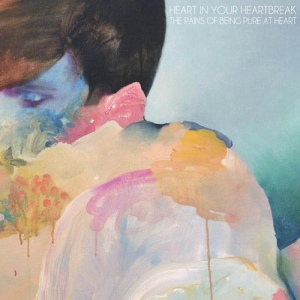 This new single is the first taste of the brand new album from THE PAINS OF BEING PURE AT HEART that’s to come in 2011. Going by the name “Belong”, the Pains are hard at work on their new record, which we should see from Slumberland come Feburary.

There’s two new songs that come on this 7″ single, but only one of them will make it onto the tracklist of the forthcoming album. The name of that track is “Heart in Your Heartbreak”, and said best by the people at Slumberland, this song is “a perfect snapshot of where the Pains are headed for 2011.” – so if you’ve been dying from anticipation, this is about as close as you can get to answering your questions about the new album, at least for now anyway. As time goes by I’m sure there will be more material unveiled, but this single should do an excellent job at holding you over for some time.

Flip side track “The One” isn’t going to be a part of the official tracklist of “Belong”, but it’s absolutely overflowing with enough of the Pains jangly pop charm and ripping guitar solos to keep you smiling for days. If these are the kinds of songs that they’re NOT including on the official tracklist of the new album, then damn, we can only wonder what’s to come with this new Pains album. At this point there’s still questions to be answered, but things are definitely looking to be quite awesome for the Pains come Feburary 2011. We’ll find out soon enough!

Heart in Your Heartbreak –

The Pains on Myspace
The Pains – Official Website
BUY the 7″ directly from Insound – pressed on purple vinyl !
The Pains – Say No to Love 7″ previously posted on the Drone
An older, angrier (and highly unorganized) Pains related post.