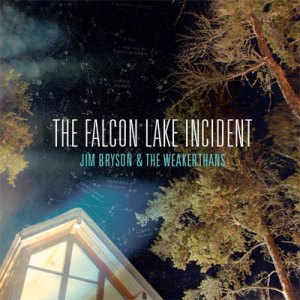 What’s up people. Now that the weekend’s over it’s time for another new week in music, so let’s start it off with a bang.

This weekend was a cold one (at least where I’m from, anyway), and I spent a greater portion of it driving around my hometown delivering pizza’s from the comfort of my cars stereo. Being the delivery guy always gives me ample time to check out various new musics, but sometimes I get a little sidetracked if something new and special presents itself. In other words, what I meant was I had a good deal of stuff to check out, but only ended up listening to one thing. Was it because of the cold and how absolutely perfect the music complements the weather for this time of year? Was it because of my undying love for John K. Samson and The Weakerthans? Would you have guessed that a band like Jim Bryson & The Weakerthans would even be on this blog? For some reason my guess is “probably not.”

Jim Bryson and The Weakerthans toured together in the Fall of 2007 (for the Weakerthans “Reunion Tour” album), and I’m not sure if that’s when this whole project began to take place, but it sounds like a good starting point, right? Before this album, that was the Weakerthans last studio effort, while Brysons was 2007’s “Where the Bungalows Roam”. With that being said, it’s about time that both of these acts got back in the studio to lay down some new tracks. There’s just one issue – they didn’t record in a studio. They spent this past January in a cabin in the middle of a -40C winter on Falcon Lake in Manitoba, and the results are quite stunning. To see for yourself where I just got all that information, follow this link to the Jim Bryson website and scroll down to his posts from the beginning months of 2010.

I had never really thought to check out Jim Bryson (even after he opened for the Weakerthans in 2007), but I can tell you right now that I’ll be looking into his stuff after hearing this new album. These Canadian musical masterminds are obviously doing something right, and they certainly deserve a little praise for this record here. Coming from a Weakerthans dominated musical diet (and not so much Bryson), I have to say this – it’s like a Weakerthans album with the country-esque twangy guitar and laid-back approach, but with the addition of Bryson the music gains a little more energy at times than a Weakerthans album normally would have (like in tracks “Wild Folk”, “Up All Night”, “Kissing Cousins”, and “Decidedly”). If you’re familiar with the Weakerthans song “Watermark”, pretend they transplanted the raw energy from that song and spread it out around “The Falcon Lake Incident”. The result would be this album we have here.

One of the songs that first comes to mind that has that natural energy is the fourth track “Wild Folk”. A truly glorious song when driving down the highway, leaving all the other cars in your dust behind you. There’s a constantly pulsing vibe you can grasp in this song, as you can feel the pure energy rush through your veins. There’s even a feeling of comfort worked into the song, which just says that “everything’s going to be okay”. Maybe it’s the blissful “ba-ba-ba-ba” chants from Bryson, or just the reassuring lyrics about staying back at home, which seems like the only place worth being in this song. Coming around within the final minute, the song peaks off as they rock a single guitar chord into the end as the song slowly winds down with a mysterious vibe.

Please guys, don’t sleep on this stuff. There’s something worth smiling about around every corner of this heartwarming album, whether it’s the homely feel or just the way it seems to fight off the cold weather. Jim Bryson and the Weakerthans gang put together quite a project here, and I’m more than happy to be sharing it with you guys today. Listen to the songs below, smile, and enjoy.

PS – Why would you ever grow leaves just to watch them fall off again?

Fell of the Dock –

5 thoughts on “Jim Bryson & The Weakerthans – The Falcon Lake Incident”