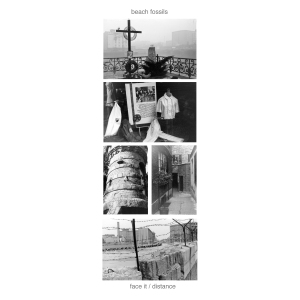 BEACH FOSSILS started to make their way onto the scene last year in 2009. First they had a 7″ single called “Daydream”, and then there was the self-titled full length, both of which came from the Captured Tracks label. Now the boys of Beach Fossils are back once again, this time with a new 7″ featuring two never before heard songs. According to the Captured Tracks website, this is where “Phase 2” of the Beach Fossils catalog begins. Everything they’ve done up to this is now a thing of the past, and it seems as if they’re really trying to get that point across.

While we don’t know exactly why they’re going for a bit of a change up, we can always try and figure it out for ourselves. Also stated in the Captured Tracks description of the 7″, they say “Gone is the ‘lo-fi’ and the comparisons that go with it.” While Beach Fossils definitely had some lo-fi qualities on the material before this 7″, there are still plenty more bands out there going above and beyond when it comes to the lo-fi sound. With that being said, I think it’s more appropriate to let those bands keep working at their lo-fi sounds, while Beach Fossils backs away from it. I say this because listening to these new Beach Fossils songs, it’s almost like these guys should have been this way from the beginning – it’s like they didn’t really want to come off as a lo-fi band, it’s just what people ended up thinking.

So this new 7″ was their first chance to really change things up and get people to change their outlooks on the band. If you ask me, they’ve done a hell of a job. Two crystal-clear and equally addicting new tracks fill both sides of this 7″, and if “Face It” doesn’t keep you wondering how exactly these guys go so catchy, I don’t know what will. Punchy (almost funky!) bass lines, deliciously memorable guitar hooks, and an eerie change up about half way through the song…FACE IT, this shit is awesome. And that middle part (right after 1:30 til 1:47ish) seems so necessary and natural that it’s actually haunting. You can check out “Face It” right below – I’d highly recommend you do so – and then head to the Beach Fossils Myspace to hear the B-side “Distance”.

Beach Fossils on Myspace
BUY the 7″ directly from Captured Tracks