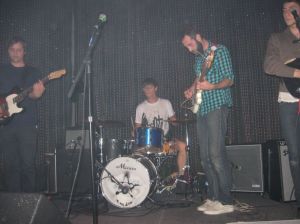 Hey there – sorry for the post delay today. Tons of things needed to be done before this was made up. So as you might already know, last night two equally awesome Canadian bands were in Philly. Those bands were WOMEN, who hail from Calgary, and then DD/MM/YYYY, who hail from Toronto. At first glance, these two bands might not seem like they go together too well, but think about it a little more and you might change your mind. They both like to play as loud as possible, and they both tend to have noisy and rackety qualities. Lots of little intricacies (that aren’t always subtle) make up the bigger picture for both of these bands while they’re performing on stage. Whether it’s the unique, jaw-dropping guitar playing style found in Women, or the relentless full-on musical assault from dd/mm/yyyy, either of these bands are bound to entertain. Now see for yourself after the jump:


dd/mm/yyyy – Digital Haircut: I missed a good chunk of this one at the beginning…this was the first song of the night for dd/mm/yyyy. These guys almost get to the point where they’re creating a soundscape in this song – with some sort of ambiance and the mindful strum of the guitar. One thing you can be certain about though – the drumming. It’s absolutely killer! And where did that saxophone come from? They should call this stuff spaz-rock.
dd/mm/yyyy – Bronzage: Well, apparently this song went out to binary code. Interesting. I forget how that came to be. Once again – you’ll probably notice the ridiculous drumming before anything else. At the same time there’s even some Nintendo-esque video game sounds weaved into the song. Cool.
Women – Narrow With the Hall: This was the first song from Women for the night. What a great way to kick things off, too. Certainly one of the more inviting songs from their latest LP “Public Strain”. Before hearing “Public Strain” I was told there was only one good song – that song being “Eyesore”. When I listened for myself I immediately ditched what I had previously heard, thanks to songs like this one right here.
Women – Heat Distraction: The second track from their latest effort “Public Strain”. The sharp, jagged guitars really cut deep on this one. Unfortunately these guys don’t do much moving on stage (as you can see), so it’s up to you to get into the music yourself. And that’s probably my only complaint from the show…well…second…
Women – Black Rice: Here’s one I think most are already familiar with. I don’t know for a fact because last night was my first time seeing Women, but I’d have to guess that “Black Rice” is always a concert staple for these guys. Correct me if I’m wrong!
Women – China Steps: The beginning song to the second half of “Public Strain”. That opening bass is quite foreboding – definitely haunting and definitely eerie. It doesn’t help once the guitars come in either, because they only help progress the eerie vibes that are certainly present in this song. Things calm down for a bit in the middle, but not for long. The headache-inducing squeal of the guitar is enough to drive anybody insane if they listened to it for long enough.
Women – Eyesore: There was no way these guys were leaving without playing this song last night. Considering it’s the single from their new album, it’s kind of expected that they would play it anyway. Lot’s of little guitar hooks scattered throughout this track help make it what it is. Women definitely nailed the song on every level, except for one – they totally shortened up the Earth-shattering jam out at the end. Of course they can’t play that shit forever, but come on! It’s your albums single! Play that shit like there’s no tomorrow! The song takes awhile before they pin down anything specific, and once they get to it, they don’t even go all the way. Oh well. Maybe it just seems shorter because they sped it up…
Women – Drag Open: One final song for the night before they called it quits. This one has more of that scratchy, metallic guitar that was in songs like “China Steps”, and then after a ridiculous breakdown things change up a bit. Then they get back to the sharp, angular guitars from songs like “Heat Distraction”. A great way to end the night indeed.

Thanks for coming by once again – I have one last treat for you from the show last night. I had some luck and got a somewhat decent take of “Eyesore” from a live setting. You can check it out below along with the two songs that appeared on the 7″ that came with “Public Strain” pre-orders! Let me know what you think in the comments. And there are a few more videos from the show – you can check those out RIGHT HERE.