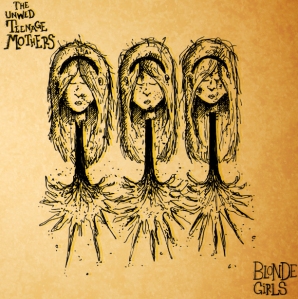 Hello, hello. I originally planned on having this LP posted a bit sooner, but then I stumbled across that Lord Huron stuff over the weekend and my plans totally got destroyed. You can probably figure out why too – I wanted to share that stuff as soon as possible. I’m still having a tough time listening to other music right now too because that single is like the Nazi of my portable music device.

If you’re stuck on Lord Huron like me still, well, I got some bad news for ya. The Unwed Teenage Mothers are certainly not far off on the addiction scale. The songs on this LP are short little pop-punk outbursts that I’m sure will crawl under your skin, therefore forcing you to play them over and over again before you’re finally satisfied. Which brings me to my next point – it was a superb move by the Play Pinball! Records dudes to press the same songs on both sides of this “Blonde Girls” LP. If you’re confused on what that means, read this album description. Basically this LP has the same nine songs on both sides of the record, hereby doubling the life of your brand new record! It’s definitely a unique way to go about it too. I don’t think I’ve ever seen/heard of this before. It’s almost like buying two of the exact same record.

They pressed 420 copies of the vinyl total, with 100 on ‘blonde’ vinyl, 300 on black, and 20 on blue (apparently you have to talk to the band to get a blue copy), but they definitely still have plenty of copies of the blonde edition available, and I suggest you get on that right away before it’s too late. No matter which route you choose, you’ll still be happy though, because these Unwed Mothers are just great. It’s good, honest pop-punk with a bit of the lo-fi scuzz mixed in, and chances are the frenzy is only just beginning with these guys. Get on it now while it’s still early. Said best by the Play Pinball! folk, “The Unwed Teenage Mothers are gonna knock you down and then knock you up,” so please check out these songs from the record below. Happiness shall ensue. Hopefully not pregnancy. Enjoy.

PS – They updated the layout of my WordPress theme. What do you guys think? Give me some feedback, leave a comment on the post!

No One Wants To –

The Unwed Teenage Mothers on Myspace
BUY the LP directly from Play Pinball! Records – Only 100 of the ‘blonde’ edition!