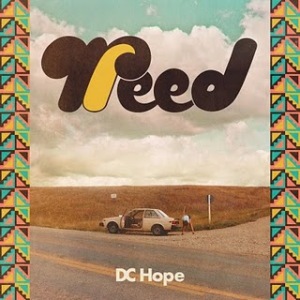 I was surfing around the web yesterday to find something new to post up, and I came across something that’s slightly different from everything else we’ve been listening to lately. It came from one of my favorite blogs Shoegazer Alive, and I think what originally caught my eye was that retro looking artwork you can see to the left, not to mention the name of the band – WEED. Yeah, Weed, but you could also call him Willy “Flip” Anderson, who happens to be main man behind the music. This is his first official release, and also the first release from the label putting it out, Moongadget.

Mr. Anderson creates these severely bent, lo-fi “bedrock” jams that are increasingly fuzzy and mangled, and each one brings you to a place on a hazy Summer afternoon where there wasn’t much else to do but hang out in your bedroom and make some music. Parts of the songs sound electronic, while other parts sound more instrumental, but either way there are definitely some nods to the chillwave sound (like the trippy track “Run to Cranes”) that’s been storming the web. While this stuff does chillwave justice, I still hope in the long run that the fad is starting to die down a bit, because it’s beginning to show up everywhere. Like my G-mail inbox.

I have two songs to share with you guys from the EP – the loose, easy going, bass-bumping jam “W.G.A.” and the twisted, gritty lo-fi madness of “Might as Well” which has enough fuzz to make your head explode, but at the same time it’s bound to make you smile. One last thing: this stuff WILL grow on you. But that’s all for today! Lots of new stuff coming in lately…stay tuned…

Weed on Myspace
BUY the EP on cassette – a limited edition of 50!
Weed – Moongadget Artist Page