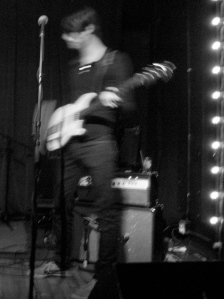 A little over a month ago a brand new band began making waves and hitting everybody’s inbox with words about their debut 7″. You might remember them as Family Trees.

There’s a dude who makes up 1/3 of Family Trees, and his name is Joseph Pruitt. Believe it or not, Mr. Pruitt has a solo-project when he’s not concentrating on Family Trees, and the name of the band is SON OF RAMS. He’s pretty much the only member of the band, taking the position on just about every instrument you can hear in the music. And if you’re expecting this to be somewhere in the same vein as Family Trees, then you’re sadly mistaken! He ditches that lazy, summery sound you hear in Family Trees and goes with his own blend of intoxicating guitar-driven weirdo-psych-rock that’s just fantastic. Each song features Pruitt shrieking and carrying on at excessive volumes, along side of some nasty lead-guitar work. No exaggeration either – just about every last song has a bad ass lead guitar hook (In Kind, This Wisdom, No Concept/No Logic, Spanish Mansions, The Veteran: James Page, Flying Tigers) or some crazy ass chicken-scratch solo (A Second Season, Ancients), and that’s about all it takes to get you to play the songs over and over again.

Since you guys have the ability to stream each song from the album (you can even download it all at once), I’m not going to go too in depth with any descriptions. Instead I’ll just say that the sooner you guys get into this stuff, the quicker you’ll be becoming addicted to all the unpredictable guitar madness that’s waiting for you around every corner of the album. If you don’t want to waste time downloading anything, just check out the few songs I’ve uploaded below. I’d recommend starting with “In Kind”. It’s a welcoming start to the album, as it almost comes off as a type of anthem when the lead guitar comes in during the second half.

No Concept/ No Logic –

DOWNLOAD the Untitled LP for FREE!!!
Stream/Download each song from the LP right here!
Son of Rams on Last.fm