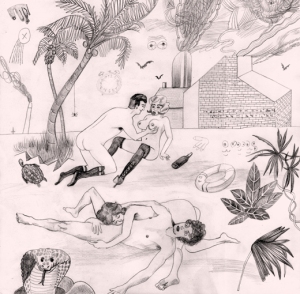 Hey guys. So I know the last Jacuzzi Boys post wasn’t that long ago, but you gotta blame the Jacuzzi Boys. There music is just so damn addicting. Before this week I had never really listened to them; I had only seen their name in various spots across the interweb. Now I’m going out of my way to find all of their 7″ records, and I just purchased their full-length “No Seasons” last night from Florida’s Dying. My efforts in finding all of their records probably won’t pay off, because I’m pretty sure a few of them have been out of print for awhile now, but hey, it never hurts to try. The full-length came out sometime during 2009 after the success of all of their earliest 7″ singles. For that, you gotta commend them, because not every band gets that far.

The LP starts off on a great note with the hectic song “Blow Out Your Lights”, as it sets the tone for the rest of the party-time madness that’s about to unfold. Next up comes the oddly titled “Smells Dead”, and I don’t think somebody would make a song about something smelling unless it really bothered them. I think that’s the case for this song too; lead singer Gabriel tried everything to make the smell go away too – he lit candles, he opened windows, but it still smells. Coming up next would be the third track called “Fruits”. Like most of their songs, this one is dominated by a crafty guitar hook that is sure to sink in and keep you coming back for third and fourth listens. Drummer Deigo goes a step further in the song by adding in his cowbell and it works great for the song.

Up next comes “Island Ave.”, which I’m sure you’ve already heard if you know the Jacuzzi Boys. This was the featured song on one of their 7″ that came from HoZac Records back in 2008. They re-recorded the song for the full-length, and it sounds fantastic. The second half of the song is when the fun really starts, as guitarist Gabriel makes his guitar squeal over the buzzy, ground shaking bass of bandmate Danny. Quickly following up “Island Ave.” comes the album-titled song “No Seasons”, and surprisingly enough it’s the shortest song on the LP. The bass lazily guides you through the song as lead singer Gabriel let’s us know that he “Ain’t got no seasons at all”, and suddenly the song is over. But it plays seamlessly into the next song “Komi Caricoles”, which was a B-side song from their earliest 7″ record “Ghost Ghost”. This one kind of sounds like a lazy island jam, and about 3/4 of the way through the song suddenly picks up speed out of nowhere and forces you to tap along to the beat.

“Komi Caricoles” marks the midway point of the album, which means there’s about six more tracks to listen to. This entire half of the album is certainly worth your time, but some tracks stand out more before the rest. For example, the fun lyrics of “Planet of the Dreamers” when Gabriel repeats “Cosmo grass, pig made out of glass” (??). Although I’m not entirely sure that’s what he’s saying, it makes for a fun sing-along. Another one worth hearing from this side would be the guitar-driven “Dock”, which is another garage rock great with an addicting guitar hook, or the final track “The Park (Dig It), which gives you the feeling you’re on a spinning, never-ending merry-go-round. I think that’s all for today guys, but you should really check out these songs below if you’ve never listened to the Jacuzzi Boys before. Thanks for coming by, and enjoy your day.

Planet of the Dreamers –

Jacuzzi Boys on Myspace
BUY their LP directly from Florida’s Dying Records
Check out their most recent 7″ “Bricks or Coconuts” right here.

5 thoughts on “Jacuzzi Boys – No Seasons”