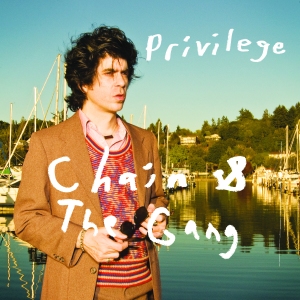 Last we heard from Ian Svenonius and his Chain Gang, it was over a year ago. Their first full length LP came out on K Records back in April of 2009, and since then they’ve been pretty silent. Now, Ian and his Chain Gang are back once more, and they’re offering up a fresh, funky, fun loving 7″ that features two brand new tracks from the band. These two songs are almost like a continuation of where they left off from their LP, “Down With Liberty, Up With Chains”, carrying over all the humorous attitude and sassiness that made their LP such an interesting and fun listen.

A-side “(I’ve Got) Privilege” definitely falls into the funky category, complete with female backup vocals and a jazzy bass line that’s bound to get your head bobbing along to the beat. Flipping over to the B-side, they change things up a little bit, and it’s almost immediately noticeable. They leave behind the funky rhythms this time, and instead they just rock out and teach you how to sound like a genuine Detroit rock band. I have the A-side for you to listen to below, and you can head on over to their Myspace page so you can listen to the B-side. I don’t know what you’re all going to think, but this little 7″ is quite an awesome one. The best part is, it came out of nowhere. I had no idea these guys were putting anything new out, so this one was definitely a nice surprise. I hope you guys enjoy it as much as I did!  Now if only I could think of a band name as cool as theirs…

Chain and the Gang on Myspace!
BUY their records directly from K Records