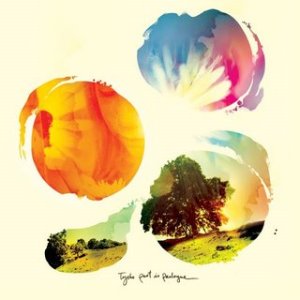 Scott Hansen is the name of a San Francisco based design artist who some people might already know as ISO50. As ISO50, Scott produces his own personal designs, and then they’re put onto things like t-shirts, hoodies, and posters. When Scott isn’t concentrating on his design career, chances are he’s putting his time into his moonlighting profession: music production. As a music producer, Scott is known to the world as “Tycho”. His music could be described most easily as electronic, but that’s a bit too easy. Along with electronic, some other accurate words to describe the music would be ambient, atmospheric, spacey or dreamy, not to mention that his music would make the perfect soundtrack to anybody’s dreams at night. The songs never contain any lyrics, but that doesn’t mean there are no words. Instead of lyrics, you can hear bits of people speaking in the background, whether it’s a little boy shouting his age, or a weather man telling you the forecast. Listen closely and you’ll definitely hear what I’m talking about. I always thought maybe there was a story that could be pieced together with all the different voices that can be heard, but I don’t think that is the case. A good example with many of these voices would be on the track titled “PBS”. Check that out here and listen for yourself. In this song you most often hear the voice of a woman and a young boy, and unlike most of the songs, the voices actually become part of the song rather than just clips of someone speaking thrown into the background. I’m not entirely sure why Tycho has so many clips of people speaking in his music, but I can assure you it makes for an interesting listen. A lot of times I find myself listening to Tycho when trying to sleep or attempting to do homework, and every time I swear I hear something new, whether it’s a voice or a sound effect. If you’re still not convinced enough to listen to Tycho, be sure to listen to this track, which is titled “Could Generator”. This track is without a doubt one of the highlights from the album, so if that doesn’t do the trick, I don’t know what will.

Scott Hansen’s Official Blog
Past is Prologue: BUY (You can also purchase some of Scott’s design work here)

One thought on “Tycho – Past is Prologue”