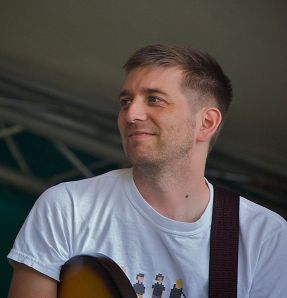 Hello! How are we all today? Hopefully better than ever. Today I have something that I hope everyone will enjoy. It’s a live session featuring John K. Samson, the lead singer and guitarist from The Weakerthans, and also a former member of the band Propagandhi. He was an active member in Propagandhi from 1991 to 1997, and shortly thereafter, he went on to form The Weakerthans. The Weakerthans then formed in 1997, and have been continuing to rock since, releasing their most recent album entitled “Reunion Tour” in 2007.

Aside from working with The Weakerthans, John has released some material as a solo artist. His first release came back in 1993 when he was still a member of Propagandhi, and it was a cassette tape featuring 15 songs that was called “Slips and Tangles”. Two years later in 1995, six of those songs from the “Slips and Tangles” release were re-released on a new EP, titled “Little Pictures”. This would be Johns last solo release until recently in October 2009, when he put out his second EP “City Route 85”. According to the info on the Anti- Records page, “Samson’s solo record entitled City Route 85 will be the first in a series of recordings exploring the atmospheric streets and highways surrounding the musician’s home in Winnipeg, Canada.” Interesting! Music that explores the streets and highways of Canada? I am beyond interested. But if this City Route 85 wasn’t good enough for you, you’re in luck, because they plan to release at least three of these new singles. I have yet to hear this new single, but I will, very, very soon. In the meantime, check out this awesome live session from John at CBC Studios, and be sure to check back regularly, because I love John K. Samson and the Weakerthans way too much (just check my Last.fm charts) to not post anymore of their material. I promise. The man just has such a way with words; it’s amazing. If you don’t believe me, maybe you’ll believe this quote from The Hold Steady frontman Craig Finn, who straight up admitted that John K. Samson “is the lyricist that I can say, without hesitation, is better than I am.” I rest my case. Enjoy your day.