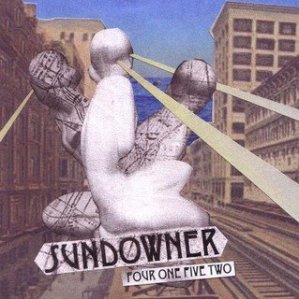 2010! Sundowner is an acoustic project of the singer-songwriter Chris McCaughan, who is from a wide range of bands, one of them being The Lawrence Arms. Chris McCaughan is the lead singer and guitarist for Sundowner, and he is assisted by Jenny Choi on the cello, keyboards, and vocals, and Lawrence Arms bandmate Neil Hennessey who plays acoustic bass. Since the bands beginning back in 2006, they have released just one album up to this point. It was released on March 12th, 2007 on Red Scare Records, and it is titled “Four One Five Two”. Apparently that is the number of Chris McCaughan’s childhood address, which is probably located somewhere in Chicago, but this information has yet to be confirmed.

If you’re already a fan of the Lawrence Arms, then you’ve been missing out if you haven’t heard Sundowner yet. Included on their first album are 12 tracks in total, and 2 of them are remakes of some of the best Lawrence Arms songs, being “My Boatless Booze Cruise” and “One Hundred Resolutions“. Chris has been know to cover other Lawrence Arms songs at live shows, and with a total of five Lawrence Arms albums, there is surely always another song you could request. Also, if you’re lucky, try and find Chris after a show. Chris played an opening set for Chuck Ragan on December 2nd, 2007 in Philadelphia, PA at the First Unitarian Church. After the show we approached him and asked him to come “hang out” outside with us. He happily accepted and chatted with us outside for a few minutes. Some topics that came up were about the differences between Chicago and Philadelphia, touring, and about the dude Chuck Ragan he was opening for. Chris was beyond nice to us, and was extremely grateful for us coming out to see him and even approaching him to talk. Hopefully he comes back again real soon. Thanks for reading, happy new year, and check back tomorrow.